Charles Eastman and the Reformers | I’m reading | The Big Isms

I hope you are all enjoying the winter … (I’m FREEZING HERE) … and do avoid politics as much as you can. (yeah, sure… kidding)

My research project on the reformers in Indian Country (and Dr. TA Bland) must take more of my time so please excuse my absence from blogging.  Still I will have some history to curate and share of course…(see my note below)

Here’s a sample of what I am working on:

Probably the best known American Indian reformer was Charles Eastman, a Santee Sioux. After being sent to a Christian boarding school like most of the reformers, Eastman “blazed a path of distinction” through an Ivy League college and then through medical school. He was an agency physician at Pine Ridge, S.D., had a private medical practice in Minnesota and co-founded the Society of American Indians, which published the Quarterly Journal, the main vehicle for American Indian commentary.  Eastman also wrote nine books, including a popular and influential autobiography.    “His books brought traditional Native American culture before a broad non-Indian audience and played a crucial role in cultivating a sympathetic audience for Native concerns,” Hoxie wrote in the book, “Talking Back to Civilization: Indian Voices From the Progressive Era.”  In addition to criticizing the actions and policies of the Indian Office and other federal programs, Eastman and his peers proposed many alternatives for bringing Indians to “civilization.” 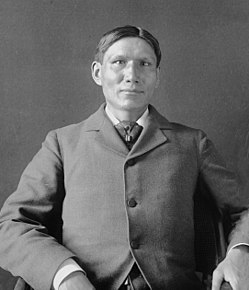 Charles Alexander Eastman was a Santee Dakota physician educated at Boston University, writer, national lecturer, and reformer. In the early 20th century, he was “one of the most prolific authors and speakers on Sioux ethnohistory and American Indian affairs.”

Charles Eastman and his wife separated in August 1921, possibly because of opposing views regarding the best future for American Indians.  Elaine Goodale Eastman stressed total assimilation of Native Americans into white society, while Eastman favored a type of cultural pluralism in which Indians would interact with white society while retaining their Indian identity, beliefs and customs. (this is only one theory on why they separated…)

During 49 of the 72 years between 1789 – 1861 the Presidents were Southerners.  All of them were slave holders.  Two thirds of the Speakers of the House and President pro tem of the Senate were Southerners.  At all times prior to 1861 the majority of the Supreme Court were of Southern origin.  Six of the eight Supreme Court Justices appointed by the Tennessean Andrew Jackson (The Indian Killer) and his hand-picked successor were Southerners, including Justice Roger Taney, author of the notorious Dred Scott decision.

By any reasonable standard, the violent overthrow of the largest, wealthiest slave society on earth ought to qualify as a revolution. Four million slaves were liberated during the American Civil War and with that the labor system of the South was radically transformed. Abolition was immediate and uncompensated. The “Slave Power” was overthrown, ending decades in which the South held disproportionate sway over the federal government. The Constitution was fundamentally restructured by three amendments that abolished slavery, redefined citizenship, banned racial discrimination in voting, and forever altered the relationship between the federal government and the states. The revolution secured the triumph of wage labor, paving the way for the Industrial Revolution of the late nineteenth century and with it a Gilded Age of capitalist plutocracy.

How did this happen? Ask a random group of American historians what caused the Civil War and they’re likely to reply in unison, “slavery.” Push them to elaborate and they’ll probably cite the southern secessionists who were as clear as could be that they were leaving the Union to protect slavery.  But protect it from what? Was the North actually threatening slavery? Ask those questions and the same historians are likely to break out into rival and occasionally angry camps. On one side are those who insist that when the war began, northerners had no meaningful antislavery convictions to speak of. Emancipation was forced on an unwilling North and a reluctant Abraham Lincoln, either by the slaves themselves or by the exigencies of war. A few years back one historian of the secession crisis actually claimed that the slaves were freed “inadvertently.”

On the other side are those who see the rise of antislavery politics, culminating in the triumph of the Republican Party, as a major cause of the Civil War. Different historians stress different aspects of this  process, but there is widespread agreement that antislavery politics not only split the nation, it also divided the North. Republicans ended up fighting a two-front war — against the South, obviously, but also against northern Democrats. This conflict within the North was epitomized in the famous series of debates between Abraham Lincoln and his Democratic rival Stephen Douglas. continue…

Filmmaker Nancy Buirski: Recy Taylor's story is "a very pivotal link in a chain that goes right through the civil rights movement, right up through black power" #DNlive pic.twitter.com/xn5qnT4AqN

.@Yale historian Crystal Feimster on the rape of Recy Taylor: There is "a long tradition of black women speaking to sexual assault and sexual violence even when justice isn't an option" pic.twitter.com/4F6JywwNIO

We picture archives as airtight troves of information. But with redactions, codes, and scribbles, there are plenty of ways for mystery to wriggle in.

This Alabama Rock Star Wants To Remind You That Roy Moore is Not Normal https://t.co/PyD2GJ9UBg via @viceimpact

On @intercepted: Nixon White House counsel @JohnWDean on the Mueller investigation & how the CIA may benefit from Trump’s presidency. @DanielEllsberg on the secret nuke docs he never leaked. @pattersonhood talks about growing up in Alabama and performs! https://t.co/C970QnWzyv

Check out this book list (swoon) – when winter hits, I read up!
Check out the Intercept podcast – it will blow your mind too!
I had other blogs going but now they are done/gone/history.  (Some were for my mental well being)

Starting in January, I’ll be posting just once a month. I have more work to do.