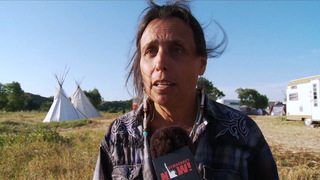 While Democracy Now! was covering the Standing Rock standoff earlier this month, we spoke to Winona LaDuke, longtime Native American activist and executive director of the … (watch video)  Read More →

AMY GOODMAN interview: Is facial recognition technology being used (at the protectors camp)?

Standing Rock Tribal Chief DAVE ARCHAMBAULT II: That’s a crazy question, Amy, and I’m glad you ask it, because when you have a lot of people in an area, there’s all this paranoia that is present. And we don’t have to be paranoid anymore. We need to be proud of who we are. This is a big time in history. We need to hold our chins high and show our faces. We’re not doing anything wrong. And if facial recognition technology is out there, I would doubt that it’s here. All authorities have to do is go on Facebook, go on the Democracy Now! videos, and they’ll see people’s faces there. And that’s where authorities are getting information. The people who are videoing incidents determine—we create the evidence on ourselves with these—with our iPhones and social media. I would highly doubt that facial recognition is something—we have our own websites, we have our own Facebook pages. We give all the information that is out there to the authorities through social media. [(Blackwater?) Trucks have been seen taking photos of people since this comment.]

***The “No Dakota Access PipeLine” (#NoDAPL) camp in North Dakota has grown each and every day… YES YES…we are united… “It’s historic because the 200 or so tribes that are protesting the construction of the $3.7 billion Dakota Access Pipeline have not united together for more than 150 years,” says Jennifer Cook is the policy director for the American Civil Liberties Union of North Dakota.

Fletcher Law360 Commentary: “The Right Side Of History: Obama’s Administration And DAPL”

The Standing Rock Sioux Tribe, hundreds of Indian tribes that support its position, and the thousands of Indians that stand by its side in Cannonball lost an important ruling by a federal court on the Dakota Access Pipeline fight (DAPL), only to learn minutes later that the Obama administration, the defendant in Standing Rock Sioux Tribe v. United States Army Corps of Engineers, would dramatically reverse its position and grant most of the relief requested by the tribe.

Cape Cod Times:  …And with hundreds of natural gas, oil, and petroleum pipeline accidents that have occurred in just the last 20 years, including when Shell Oil’s Texas pipeline burst in 2013, irreparably poisoning the Vince Bayou; and the 2011 Exxon Mobil pipeline break, which spilled 1,000 barrels of crude oil into the Yellowstone River in Montana, U.S. residents should be worried that the project could move forward.

Standing Rock is HUGE news but somehow ABC, NBC, CBS (US MEDIA) aren’t covering it… hmmm. WHY? I tell my students, go look on Twitter… or read Indian Country Today News Media online and we can always count on Democracy Now with Amy Goodman!

@Emily4wildwoods thk u for mentioning about Berta Cacerces. Amy Goodman is a hero of democracy. They threaten jail for covering #NoDAPL

7 things you need to know about the Standing Rock Sioux Tribe's fight against the Dokota Acess Pipeline #NoDAPL https://t.co/Nmi5DJBsdH

Despite what some headlines have said Dakota Access Pipeline construction has never really stopped #NoDAPL pic.twitter.com/pJAARGhqAg

So there you have it… see you next week…L/T