Write A Good Story: How Leonard Peltier and Rebel Journalism changed me!

The Making of an Activist-Journalist – Paul Buhle remembers the rebel reporting of John Ross.  “Who is a rebel journalist?” That is the big question asked by John Ross.

We are living in a world today in which the struggle between knowledge and ignorance, civilization and desecration, creation and destruction, is raging. – Albert Litewka, Chairman of the Board, Los Angeles Review of Books

Journalism has changed! There has been a fascinating change in the traditional journalistic press over the last several years. Take corrections as an example. It used to be that corrections to printed news stories were a really big deal. There was a high bar to get a correction accepted in a newspaper or magazine. The story as printed was the permanent record.  That was then. – MARC ANDREESSEN LINK

I want to thank everyone for the good words concerning the loss of my brother Danny. It’s very appreciated.  I wrote this post prior to his death:

I was living in Seattle when we bought our first PC computer and it was a VERY BIG THING (and heavy) in the early 1990s.  At my job at Jerden Records, documents were still being typed. I recall Jerry my boss had a credenza and kept double copies of all his typed correspondence in file folders. The Zerox purred; this Goliath copy machine had its own room- it was HUGE!  We published a marketing newsletter NORTHWEST LOG that was distributed to Seattle radio stations. It was hand-typed too.

Soon I brought my own computer to work and loved using it. Do you recall WYSIWYG – I think it was a way to convert from PC to MAC and print documents from floppy disks? There were places in Seattle that would print documents for us. That seems like a million years ago, right? Most people don’t even know what a floppy disk is!

Using a personal computer was the way I worked and how I wrote.  After writing my first play in Oregon, I decided to write professionally, even get paid for it.  Looking way way back, I got the urge when I wrote (badly) for the high school newspaper.  I didn’t get a minor in English at UW-Superior because of two required courses (on Shakespeare) I didn’t take. (sigh) I studied theater for my BFA major and had all I could handle of Shakespeare!

All along, I knew writing is what I’d be doing – eventually. I kept journals all my life. I wrote a few magazine articles for Oregon Coast Magazine while I lived on the west coast, hoping to find more work freelancing.

My first (good paying) editor job was working at the Sawyer County Record in Hayward, Wisconsin. Our crew had to cut-and-paste and layout our computer-generated stories onto big sheets for the press. We used hot wax! Can you imagine? That was in 1996. We were a weekly newspaper so Tuesday was layout night and often we worked until 2 a.m. to get it all done. I drank Mountain Dew (as a drug) to stay alert. Driving home was hard when I was friggin’ exhausted

Is that how journalism changed me? Not exactly.

At the RECORD, I wrote my first feature story about a woman who lost her son to AIDS in 1996. I went to her home and we talked and I took a photo of her as she showed me a quilt piece she’d sewn-by-hand to be added to a large traveling AIDS quilt exhibit.  In those days, creating awareness was the key to AIDS prevention. This mom was honoring her son. I had no judgment about AIDS or this mother or her son or homosexuality.

A letter to the editor came in the following week, calling me a “Lethal Journalist” for writing that story: the letter writer implying I condoned homosexuality and more importantly: he was a local Mennonite minister.

BAM! That fast I’d made my mark! Proud of myself? I really was. Lethal Journalist was a badge, better than a journalism award.  (I did win awards later, but that label stuck.)

In 2000, my adoptive mom Edie got a TV satellite for her rural lake house in Wisconsin.  Edie kept telling me about this young journalist Amy Goodman and Democracy Now.  She watched it daily and took notes, it was that good and important, she said. She used a VCR to make copies of the broadcasts for her local priest who didn’t have satellite TV.

It was Edie’s awakening and shift to a different kind of news program that stuck with me … Mom was elderly. Now she spoke of other news shows (CBS, ABC, NBC) with disgust and how Amy was reporting news those major media outlets dismissed or refused to cover.  [At Mount Holyoke College, I got to meet Amy at her book signing and I bought a signed copy of STATIC for my mom.] 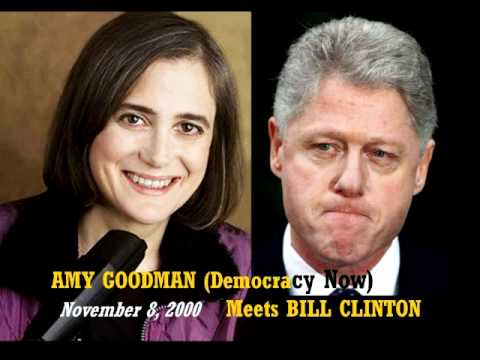 This is a quote about Rebel Journalist John Ross and Amy and others who are not mainstream but as important in my mind:

The journalistic heroes and heroines, including Glenn Greenwald, Amy Goodman, Naomi Klein, Jeremy Scahill and John Nichols among others, operate in a wide array of venues, print to radio, television and web, wherever they can find space. They are often alone, it seems, in opening up debates that do not occur in the mainstream, obsessed as it is with fast-breaking trivia and assuming, as it does, a conformity of views about American goodness and the terror threatened or actually imposed upon the virtuous by the barbarian outsiders. LINK

Back in 1998, I interviewed famous political prisoner Leonard Peltier (see Incident at Oglala documentary by Robert Redford) while he was still an inmate in Leavenworth, a federal prison in Kansas.  I’ll save that story for another post for this blog but I do recall I was very very nervous… I remember Leonard told me, “Write a good story.” This interview was done over the phone at his Defense Committee Office.

PRESSURE?! I was scared sh*tless!  Back in Wisconsin, Mom assured me I would be fine.  I had taken a boatload of good notes.  I could write a good story about Leonard Peltier.

And I did it (actually twice).

[footnote: I met Amy Goodman again in 2008 at the Wisconsin Book Festival. I was invited to Madison to read an excerpt from my memoir. My husband Herb and I went to hear Amy and Jeremy Scahill at the book festival…]

A sampling of Features I wrote for News From Indian Country: Wisconsin’s independent national Native newspaper

Some are archived at News From Indian Country website…

The Forum for the Academy and the Public is pleased to announce our 2016 conference, Freedom of Expression in a Changing World: What Cannot Be Said, which will take place on January 22nd, 23rd, and 24th at the UCI and USC campuses in California.

Timed to coincide with the first anniversary of the Charlie Hebdo attacks in Paris, this conference will look at the changing parameters of freedom of expression in a rapidly shifting world. We’ll be talking about freedom of expression on campus, and about the digital era, the law, and freedom of expression. Another panel will address problems of freedom of expression and journalism in conditions of repression. A further panel will address the conflicts and possible concords between freedom of expression and religious belief. Edward Snowden will appear via the web in conversation with his biographer, the prize-winning American journalist and author Barton Gellman. The Atlantic’s Caitlin Flanagan and Zunar, the embattled Malaysian cartoonist, will be among the many brilliant and insightful participants. Steve Mumford, whose outstanding paintings of secure locations off-limits to photojournalists have broken the boundaries of repression, will be speaking and presenting his work. There will be a roundtable of notable political cartoonists discussing their drawings, censorship, and self-censorship. Sandra Tsing Loh and Azhar Usman will perform stand-up with Q&A after their performances about the extent of comedians’ freedom of expression. UCLA historian David Myers will lead a discussion about tolerance and intolerance of and by religion with NPR’s Krista Tippett, USC’s Sherman Jackson, Rabbi Sharon Brous and novelist Laila Lalami. The conference will end with a grand finale musical performance by a surprise musical guest and a discussion of race and rap lyrics led by USC law professor Jody Armour.